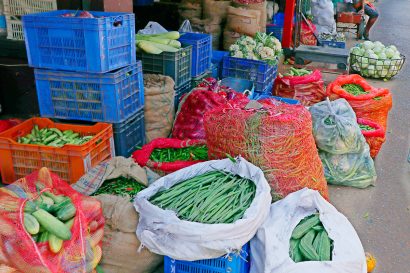 India is agricultural land. A significant segment of the Indian population depends upon agriculture for livelihood. Hence, agriculture always remains a vital concern for the government. From time to time, the Indian government took specific measures to check the agricultural market, one among which is APMC Act.

APMC full form stands for “Agricultural Produce Market Committees.” It’s one such initiative by the respective state governments. The act intends to:

APMC regulated the markets by gathering all the food produced and selling them through auctions. The concept of “Mandis” got introduced in the respective states. Mandis were the market places that fractionated the States territorially. Such markets operated through the licenses issued to the traders. APMC restricted the farmers to sell their produce directly to the wholesalers or the retailers.

The mandi system is an integral part of the Indian Agricultural sector. The recent controversy surrounding the Farmers Bill 2020 revolves around the abolition of the Mandi system to which farmers disagree. As per the new Bill, farmers are better off without the mandis as like this farmers can easily trade with the private traders and will not get restricted to the mandi alone.

In the pre-Independence era, it was a challenge for the government to check the prices of food and agro-raw materials for the industry.

However, in the post-independence era, the situation changed drastically. The preservation of the interests of the farmers became the prime focus. Itit was necessary to provide farmers with price incentives to inflate agricultural production.

Further, various incidents of exploitation of farmers at the hand of loan sharks and money lenders highlighted the defect in the agricultural administration.

APMC adopts a monopolistic approach, and hence, it prevents the farmers from selling their produce to better customers and consumers.

Mandis require licences to operate. The fees for such license fees are excessive. Some markets do not allow farmers to operate. Further, high license fees, rent and shop values are unreasonably high. Such high prices tend to keep the competition at bay. In some states, only wealthy g.roups of villagers were allowed to operate under APMC.

APMC often gives rise to the formation of cartels deliberately restraining the higher bids. Usually, the products are procured at manipulatively lower prices from the farmers and sold at sky-high prices. “Spoils are then shared by participants, leaving farmers in the lurch”.

Farmers pay unreasonably high fees, taxes and levies. In addition to it, many states do apply Value-added Tax (VAT).

Before the inception of APMC, customary markets were prevalent in India. Trends like village sales of agricultural produce, post-harvest immediate sales by farmers were widespread.

Problems highlighted by the “Royal Commission ” in 1928 were high marketing costs, nominal selling price, unreasonable levies and exploitation of farmers. The demand for regulated markets in India.

The regulation of markets tends to eliminate unhealthy and unethical trade practices, eliminating unreasonable costs and providing satisfaction to both manufacturers and buyers in the market area. Thus, many states adopted the Agricultural Produce Market Regulation Acts (APMR Acts) at the dawn of the seventies.

Over time and changed circumstances, the benefits of the age-old APMR Act withered away, which led to the realisation of the need for amended or new provisions.

In 2002 following amendments were recommended for the APMC Act:

Contract Farming (CF) denotes “a system of farming, in which bulk purchasers including agro-processing/exporting or trading units enter into a contract with the farmer(s), to purchase a specified quantity of any agricultural commodity at a pre-agreed price.“

The APMC Act of 2003 governs contractual farming in India. Due to the conflict of interest between the sponsors and APMCs, the concept of contract farming has not picked up its pace yet.

Hence, in the states like Maharashtra, Haryana, Karnataka and Madhya Pradesh, contract farming is in operation at a small scale. Thus, the purpose of the Model Contract Farming Act 2018 was to accentuate the practice of contract farming in India.

In evolving the agricultural sector in India, the Model Acts introduced so far made significant transformation but could not subside the burning issue of farmer’s benefit and income. Keeping it in mind, the Government of India introduced the following three acts:

These Acts aimed at eliminating limitations placed on the holdings of private stock of agricultural produce. And doing away with the middlemen to bring the market and the farmers closer.

The Farmers’ Produce Trade and Commerce (Promotion and Facilitation) Act, 2020

The Farmers (Empowerment and Protection) Agreement of Price Assurance and Farm Services Act, 2020

The Act got introduced to draft a national structure on agriculture arrangements to safeguard and authorise farmers to engage with agribusiness firms, traders, wholesalers and retailers for agricultural services.

The act provides for the election of the officer-in-charge, commission-in-charge and members when such an APMC Market is formed initially under this Act.

The Act empowers the State Government or the Director or Managing Director to appoint by an order:

In 1950, to achieve food security, the government evaluated that the farmer’s exploitation is the major roadblock in reaching this goal—the realisation that middlemen unreasonably exploit them through distress selling needed to get cured.

Hence, the state governments stepped in and independently introduced the Agricultural Produce Market Committee Acts, as per their convenience. Despite the variation in the legal framework, unanimously, the Act tends to:

The market committees looked after these markets. And Mandis was provided with the commission agents issued licenses by the government and given a shop in the mandi.

The farmers got the liberty to choose his agent. The buyers then sent in the bids for procuring the produce. Initially, the bids were genuine, but unfortunately, this is hardly the case now.

Hence, the Model APMC Act, 2003 was introduced to cover up the shortcomings. It highlighted the following concerns concerning the implementation of previous acts:

Initially, The Act of 2003 tried its best to eliminate the shortcomings to reap benefits but could not succeed.

Later, various acts with the same objectives got introduced to initiate a change. The main reason farmers still face difficulties despite a “model act” is the different courses adopted by the various state governments. Some states take the issues of farmer exploitation seriously and work upon it, and some do not.

Each state incorporates its act that they modify according to them, thus creating difference and difficulty in its operations.

The Act seems to be providing the benefits, but it gets mismanaged. That is why despite various amendments and the introduction of new Model Acts over the years, the primary goal of farmer’s upliftment could not get achieved.

Achieving food security and food sufficiency is the primary concern of any nation. Before independence, India relied heavily for food on other countries. With agricultural reforms, India attained adequacy and security through the green revolution post-independence.

Even though India became independent in terms of food, the plight of farmers could not be resolved. Over the years, the government introduced various amendments and the ordinance to achieve the ultimate goal of farmer’s benefit but failed miserably.

With such considerations, the latest ordinances were passed in 2020, which caused severe controversy. Even after the protest of nine months, desired results could not be achieved. The need of the hour is to reconcile the farmer’s wishes and governmental requirements to benefit our nation’s agricultural sector ultimately.

Who will act as a person of contact in case of dispute between traders and farmers?

Sub Divisional Magistrate of jurisdiction for the trade area of the disputed transaction.

Who purchases the product from APMC?

Agents and the marketing traders enabled by the said Act.

Can anyone buy the produce directly from the farmers?

As per the new Ordinance of 2020, anyone with a PAN card on them is eligible to purchase directly.

How many APMC get linked to e-NAM?