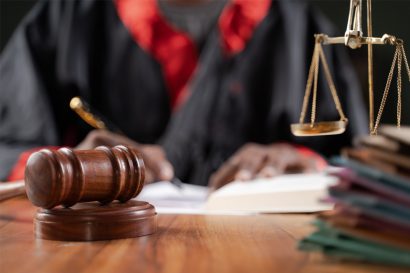 Positioned in the country’s capital, the Supreme Court is the highest branch of the judicial system in India. Sitting at the top of the hierarchy, the honourable court exercises various types of jurisdictions such as:

The supreme court is mainly known for exercising appellate jurisdiction as the final authority to pass judgments on appeals.

Appeals from all the courts present in every corner of the country, if not resolved or dismissed in lower courts, head to the highest court of appeals for marking the final judgement on the cases the appeal is for.

The entire concept of the appellate jurisdiction of the supreme gets encompassed within Articles 132 and 133 of the Indian Constitution 1950 to Section 109 and 112 of the Civil procedural code.

In the appellate jurisdiction, the highest authority in the judiciary, upon receiving the appeal, reviews and revises the judgments passed by the lower courts and then gives out a decree. This process strikes down the misinterpretations of the law and facts. It gives the appellant another opportunity to seek satisfaction concerning the case, which the lower courts could not provide.

The conditions- Appeals to the Supreme Court.

To file an appeal to the Supreme Court, specific requisites need to get fulfilled, which are as follows:

The appellate jurisdiction of the supreme court further gets categorised into four aspects:

It is possible to make an appeal to the supreme court against any judgement, order or decree passed in a High court in a criminal proceeding under the following situations:

However, it’s essential to note that an appeal to the supreme court cannot get filed if the high court convicts an accused of a crime for which the punishment does not exceed six months or a fine exceeding INR 1000 or both.

The Civil Procedure Code’s Section 2(9) defines a judgement as,

A statement made by a judge based on a decree and/or an order given in the court of law. It is a stage before granting a Decree.

The essentials of a judgement are as follows:

A formal expression of adjudication is known as a Decree. As per the court, this expression emphasises the parties’ rights of all or any issues present in the case.

The essentials of a Decree is as follows:

Defined under Section 2(14) of the Civil Procedure Code

An order is a formal expression made by the court which is anything but a decree.

It can be passed multiple times in a case, unlike a judgement or a decree.

To direct the court and the party in a particular way is called an order.

The Procedure- Hearing and Proceedings

Certificate of Fitness
When it comes to appellate jurisdiction, a party can file an appeal to the supreme court without any obstacle, only if the High court provides the party with a certificate of fitness that marks the appellant valid to present an appeal before the court of appeals.

The certificate is granted based on:

Security is when the certificate of appeal is granted, the appellant within 90 days or 60 days if a good reason is given before the court, must:

Post the deposit made by the appellant, when satisfied with the payment, the court of law shall:

The 44th amendment of the constitution brought in numerous developments and changed the outlook of several aspects, including the justice system. This amendment was the sole reason behind the creation of Article 134A.

Before the development, the constitution had no provision regarding how and when an application of issuing a certificate by the high court under articles 132, 133 and 134 needed to get filed.

Article 134A, when read with Articles 132, 133, and as well as Article 134 of Indian Constitution, to streamline the high court’s grant of certificates for an appeal made to the supreme court states that:

Every high court gives a judgement, decree, final order or a sentence concerning the appellate jurisdiction. It exercises under articles 132, 133, and 134 under any civil or criminal case involving a substantial law question. It can determine whether a certificate of fitness for the appeal to the supreme court should be given or not.

It is also said that:

The court is only required to consider granting certification of fitness only if the aggrieved party has made an oral appeal to the court of law immediately after order, judgment, or decree gets passed.

The difference between High Court and Supreme Court

Powers of a Supreme Court:

The powers of the supreme court are as follows:

In 2016, Navtej Singh Johar and five other members of the LQBTQ community filed a writ petition in the highest court of appeals in India. They challenged the constitutionality of section 377 of the Indian Penal Code.

With numerous contentions and arguments, it was decided, on September 6th, 2018, that striking down section 377 was the right way to go. The section got repealed to legally allow the LQBTQ individuals to engage in consensual intercourse and indulge in sexual relations of their choice.

From exercising Original Jurisdiction to Review jurisdiction, the Supreme Court is the highest judicial authority in the country and the top court that deals with appeals. Be it reversing, repealing or creating laws, the supreme court works to better the country’s scenarios.

With all the necessary requisites fulfilled, as filing an appeal in the supreme court under the appellate jurisdiction is a matter of privilege and not right, the highest court appeals ensure that no case leaves the courtroom without justice getting served.

What is the time limit for filing an appeal to the supreme court under appellate jurisdiction?

Can a decision made by the Supreme Court get challenged?

Yes, the aggrieved party can file a review petition about the case

Who can reverse a judgement of the Supreme Court?

What happens if the Supreme Court denies an appeal?

If denied by the Supreme Court, the decision made by the lower court stands.

What is the most common basis for appealing?