A Guide To Causes Of Child Labour In India 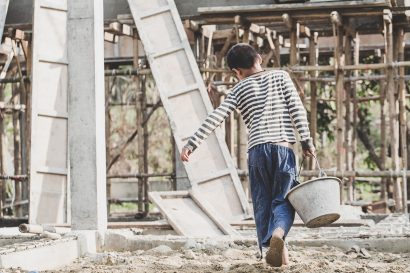 Child labour is the practice that engages the child in economic activity. This practice deprives the child of their childhood and causes harm to the physical and mental development. Child Labor can be seen as both a social and economic problem.

The causes of child labour are not limited to one or two; the causes are unlimited. Also, the problem does not get restricted to any one country; the problem persists in almost every country worldwide.

The employment of a child in any sort of industry or household activity is known as child labour. The ‘Child‘ as defined by the Child And Adolescent (Prohibition and Regulation) Act, 1986, has not attained the age of 14 years of age.

As defined by the International Labour Organisation, Child Labour means work that affects childhood and does not let the child attend school to have proper, thus depriving them of education. It also deprives children of childhood. According to the International Labour Organization, a child who works below the age of 14 does not develop socially, physically or morally.

According to United Nations Children’s Fund (UNICEF), the child gets considered to be labour when:

Child Labour is an issue present in every part of the world; the extent of such labour may vary. Causes of Child Labour destroys the lives of children both mentally and physically. The leading cause of child labour seems to be poverty. Child labour is a social problem as the country’s future are the children.

Many laws got enacted but are inefficient to curb the problem of child labour. The statistical report published in 2017 has shown that India is one such country in Asia where the number of Children who work is quite large. It showed that almost 33 million children got employed as labour in India.

The causes of child labour can be many, and some of them are as follows:

Consequences of child labour in India

Child labour is one such social evil that causes much other evil in society. A child who works as labour in any industry faces many issues as an adult. Such children are more prone to diseases at a very young age and suffer throughout their lives. General Injury that a child’s face includes cut, fractures, burns etc. but such injuries can be more vital at the later stage of their life and cause dangerous diseases.

Due to child labour, a child gets deprived of basic facilities in early childhood. Sometimes, they do not even get proper food, clothing, or medical treatment. While working at the early stage of child growth, they are prone to physical abuse that includes beating, which may lead to physical deformity due to child labour.

Child labour also affects the country’s economic welfare to a great extent. Also, child labour deprives a child of education, which decreases the country’s educated workforce and skilled workers, which will cause significant loss in the long run.

Child labour is one of the major social disasters in India. The Government of India enacted various laws to overcome the cause of child labour and prevent a child from being exploited. The laws are as follows;

The above mentioned are just some of the acts that provide conditions for labour and protect the rights of children and adult labourers working in the industry. Other than this legislation, even the Constitution of India prohibits child labour. The constitutional provision that protects the rights of the child are:

Child Labour is one of the social evils in the nation. The government of India takes various measures to curb the causes of child labour. But to solve the issue of child labour, the major causes of child labour is to be solved. These problems cannot get sorted unless the society and government take collective measures to cure such issues in the country. A child belongs to the school, not the workplace. It should be in the mind of every individual in the country. If every individual keeps aside their benefit of appointing a child as a worker in the industry in their home, then it would become easy to cure this social evil present in the country.

What is child labour?

Child Labour is the exploitation of the child by making them work in industry, household, or other activities that deprive them of their childhood.

What are the major causes of child labour?

The major cause of child labour are:

Who is a Child?

A child can be any person below the age of 14 years.

Following measures can be taken to prevent child labour in India: