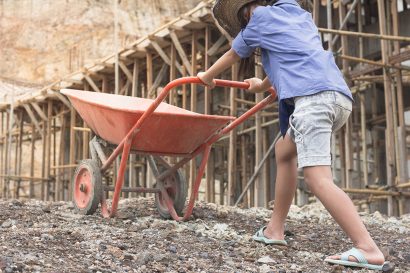 At the ages of 5 to 14 is when a human being truly enjoys their life. From taking advantage of the playgrounds to watching cartoons, as fun as it sounds, it is not experienced by all.

Child labour in India, as defined legally, is an act where children below the age of 14 years are employed to work under harsh conditions either by will or force, which torments their physical and psychological health and stars as the sole reason for their underdevelopment.

The core idea to curb such torturesome measures taken on children is the child labour prohibition and the regulation statute. From prohibiting children under 14 years to work to regulate the conditions where they are allowed to execute tasks, this statute acts as a saviour for all the children bearing the brunt of child labour.

The legal definition of child labour in India

Child labour has been defined by various entities and in the following manner:

The causes of child labour in India

Considering the conditions of India, three major concepts serve as the basis for the increasing employment amongst children, which are:

With the poverty seen at large in India, it becomes the biggest reason for families to make their children engage in child labour to support each other monetarily. Apart from this unawareness, illiteracy and unemployment of parents are also the reasons for child labour in India. Children get witnessed working under harsh conditions at a very young age for minimum wages.

Borrowing money from creditors is a widespread phenomenon in India, especially those below the poverty line.

Borrowers lean towards money lenders, banks and even end up mortgaging their assets to survive the day. However, with insufficient balance in their possession, paying the creditors back with interest becomes vehemently difficult. Hence, families work day and night with their children to overcome this difficulty, causing child labour to come into play.

From the Bangle industry to the fireworks arena, these fields involve dangerous activities in their creation and extreme precision, where employing children below the age of 14 becomes convenient. As adults usually don’t possess delicate and small hands required to make these products, children typically get targeted to do their bidding in such cases. It results in major accidents endured by these little human beings.

The provisions regulating child labour in India under various statutes

With so many hazards besieging children while working for organizations, several acts came into play to regulate the employment of adolescents and provide conducive conditions to them for the same as well.

The act bans the employment of any child below the age of 14 in any given factory.

It regulates how and when pre-adolescents aged between 15 to 18 get employed in any said factory.

The act prohibits the employment of any child below the age of 14 in any said mines.

Mines being a dangerous field of work, the act forbids an adolescent of any age till 18 to work there.

Modified last in the year 2008, the act bans employment of any child below the age of 14 in any dangerous fields of work as categorized by law.

It regulates the employment of adolescents aged between 15 to 18.

The juvenile justice-care and protection of children act, 2000

The act focuses on the punishments extended to those individuals indulging in employing a child of any age in hazardous activities and bondage.

It extends punishment to those who violate any provisions mentioned in the statutes regarding child employment and labour.

The right of children to free and compulsory education act, 2009

The act enforces the concept of free education to get bestowed upon children of ages 6 to 14 years.

It grants 25 percent of seats in every private school dedicated to specially-abled children.

The legal age for the employment of adolescents

Based on several acts and provisions, especially the child labour act, it is evident that appointing children below the age of 14 years in a hazardous occupation is a punishable offence and genuinely inhumane.

Children below the age of 14:

The statute will not impose restrictions:

Adolescents aged between the years 14 and 18

The child labour act 1986 permits adolescents ages 14 to 18 to work in fields provided they are not hazardous. If a child gets employed in a field of work, the employer/organization must fulfil the following requisites:

Organizations and employers to prevent them from engaging in a violation of the child labour act in India, are instructed to maintain an updated document that consists of the following data regarding the employment of adolescents:

Apart from the document mentioned above, the child labour prohibition and regulation act also requires the employer to connect with a local inspector, post the employment of children aged between 14 to 18 and send them the following information:

The hazardous occupations as per Child Labour law

Section 3 of the child labour act in India emphasizes the prohibitions exercised in terms of fields of work. It categorically gets stated that no child aged under 18 years can get made to work in the presented occupations:

Hazardous processes as stated by law

Child labour in India, the rules of which are governed by the child labour act, also imposes restrictions on processes the adolescents can indulge in making the life of the children safe and decent. The following suggests the fields of work, especially the occupations including processes forbidden by the law for the children to engage in:

Efforts by the Government to control child labour in India:

From 16 occupations to 65 processes, the child labour act imposes employment restrictions on adolescents under 14 years. There are numerous steps taken to prevent the rise of child labour in India, such as:

The above pie chart emphasizes the hazardous industries, children aged under 18 are employed the most.

The above bar graph shows the five states that engage in child labour the most in India between 2007 to 2013.

Development of judicial judgements on child labour in India

Labourers Workers On Salal vs the State Of Jammu

Labourers Working on Salal vs the State Of Jammu And Kashmir:

The judgment passed in the year 1984 on 25th April by the justices P Bhagwati, R Misra focused primarily on the fact that no adolescent under the age of 14 shall get employed in any activity about factories.

The judgement revolved around granting health and strength protection to men, women and children aged below 14 who get employed as labourers in organizations. The court primarily focused on the idea that children should be provided with opportunities to grow in a healthy way.

Sheela Barse vs Union Of India

The judgment, in this case, emphasized the fact that the state must take responsibility to provide a proper development of adolescents aged under 18 so that not only will they have opportunities to grow but also give the nation a reason to shine bright. It was also said that though child labour issues are not completely resolved, the judiciary institutions are and will keep doing their best to grow and expand the law to come up with a permanent solution.

The judgement focused on the fact that it is a fundamental duty of the parents/guardians of children below 14 to provide them with opportunities for growth in terms of education. This order passed by the court is precisely the basis for the initiation of the Right of children to free and compulsory education act by the government in 2009 that imparts free and compulsory education to children aged between 6 to 14 years.

Ganesh Ram vs State Of Jharkhand And Ors:

The judgment passed in the year 2006 on April 5th by justice S Mukhopadhaya and N Tiwari focused on the fact that if an adolescent aged below the age 14 gets employed in any organization, the employer will be violating the provisions mentioned in the child labour act hence be liable for punishment. Still, no penal order will be passed against the employee.

Jayakumar Nat & Anr vs State Of NCT Of Delhi & Anr:

The Delhi high court directed the NCT of Delhi in the year 2015 on 4th September to prepare a proper scheme that addresses the rehabilitation of rescued children in terms of the monetary aspect so that the parents of these adolescents refrain from making their children labourers again.

From imposing restrictions on the fields of work to punishing when the provisions get violated, the child labour prohibition and rehabilitation act is the ultimate rescuer of adolescents who are to be employed.

With so many steps taken by the government of India, such as developing labour cells, initiating projects with regards to child labour and much more, to eradicate child labour in India, especially of adolescents under 14, one can say India is genuinely growing.

It is also true that the judiciary of India has helped in the massive development in the field of child labour. With several judgements, time and again emphasizing on the dos and don’ts an employer must keep in mind with regards to employing an adolescent, the awareness has increased and the engagement of organization’s in child labour has decreased.

Per child labour act, Children under 18 are not supposed to be risking their lives to earn money but should enhance their futures so that they and the nation can shine brightly.

How many children aged between 5 to 14 years get employed in occupations in India?

How many children are involved in hazardous occupations as mentioned by the law?

Around 12 lakhs children get employed in dangerous fields of work in India.

When did the National Child labour scheme begin?

What is the action plan for tackling the child labour issue in India taken by the government?

2nd- Develop several programs for the benefit of children

3rd- Launch projects for the welfare of children

Which is the occupation, hazardous as it is, where children are employed the most?

The field of manufacturing Pan, Beedi, Cigarettes and Tobacco