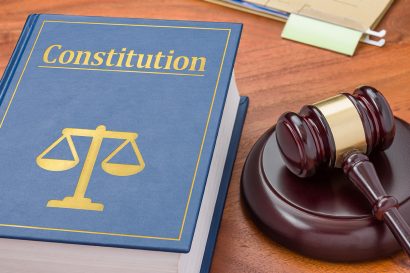 The constitution of India prescribed the power to levy tax on both the union and state government by its union list and state list.

The 101st constitution amendment act introduced the system of ‘one nation, one tax’.

This pan India uniform indirect tax system ensured the smooth flow of goods throughout the country.

Goods and services tax, also known as ‘GST’, is governed by the Constitution (one hundred and first amendment) Act, 2016.

GST prescribed the power to both the central government and state government to levy and collect it.

The 101st constitution amendment act 2016 introduction led to some amendments and the insertion of some new articles in the constitution of India.

The 101st constitution amendment act, 2016 has some salient features. These are:-

Here is a list of objectives aimed to be achieved by the implementation of GST:-

What does the seventh schedule state?

The seventh schedule deals with the subjects of distribution of powers of legislature between the union and states.

It defines and specifies and allocation of powers and functions between the union and states.

This distribution of subjects is based on articles 245 & 246 of the constitution of India.

It also states that the laws made by parliament cannot get termed as invalid on the grounds of having extra-territorial operations.

Article 246 of the constitution contains the subject matter of laws made by parliament and state legislatures.

It divides the subject matter on which parliament and state legislatures can legislate and make laws on it.

And, both the parliament and the state legislature is empowered to make laws on the subject matter mentioned in List III, i.e. concurrent list.

The concurrent list provides flexibility to the states as the laws made by the parliament on a particular subject can get eased as per the state’s requisites.

Even then, the parliament is empowered to override the laws made by the state in case of repugnancy.

These subjects get allocated under three lists. These are:-

The union list deals with the subjects under the purview of the Union legislature.

Only the parliament is authorised to legislate on the subjects mentioned in the union list.

The state list contains 61 subjects (originally 66), and the state is authorised to legislate on these subjects.

As per the concurrent list, both the parliament and state legislature get authorised to legislate on the subjects mentioned in the list.

There are a total of 52 subjects (originally 47) mentioned in the concurrent list.

These aspects get included in the joint domain of both union and state governments.

The one hundred and one constitution amendment act led to the introduction of four types of GST for governing taxation system in India:-

The state’s revenue collected from SGST on transactions made within the state on goods and services gets earned.

The SGST eliminated earlier taxes such as VAT, luxury tax, entertainment tax, octroi tax, a tax levied on the lottery, and purchase tax.

It is governed by the Central goods and services tax act 2017.

The central government earns the revenue collected from CGST.

The central goods and services tax gets shared between the centre and state governments.

Both the government will agree on combining their appropriate portion of the tax to be levied on the concerned intra-state goods and services transactions.

The CGST to get levied should not exceed the limit of 14%.

The IGST revenue gets shared between both the central and state government.

The share of revenue agreed on by both the governments will be divided between them accordingly.

It is governed by the Union territory goods and services act, 2017 and levied along with the CGST.

It applies to union territories similarly to the SGST, applicable to the intra-state supply of goods and services.

UTGST has its application in the Union Territories of Andaman and Nicobar Islands, Chandigarh, Dadra and Nagar Haveli & Daman and Diu, Lakshadweep, Jammu and Kashmir, Ladakh.

The state goods and services tax (SGST) is applicable in the Union Territories of the National capital territory of Delhi and Puducherry as these UT’s have their legislature.

GST is implemented with the view of “one nation, one tax”. It combined all the existing central and state taxes into one.

To ensure hassle-free distribution of tax among the centre and state governments, GST gets divided into CGST, SGST, & IGST.

It united the tax structure by making the states available the funds at the same time.

It provides a transparent tax structure for the consumers on the value of goods and services he is availing for use.

The GST is divided into three tax slabs to ease the process of its implementation and distribution of funds between the central government and state governments.

The maximum rate of IGST applicable is 40% and cannot exceed more than that and,

The upper cap fixed for the application of CGST is 20%.

The GST is not applicable on some goods and services or some transactions like a gift given by an employer to an employee, agricultural services like harvesting, renting or leasing of machinery, services provided by courts and tribunals, sale of land/building subject to para 5(b) of schedule II, etc.

What is an input tax credit?

The input tax credit is the amount of GST an individual already paid on the inputs, which can further get adjusted in the output. It applies to the business houses registered under the GST act.

How can one claim the input tax credit?

It can get claimed when the recipient has the tax invoice of the purchase, and the GST charged on it is already paid, and the concerned recipient has filed the GST returns.

What is the condition for disallowing the input tax credit?

How does the revenue collected from IGST gets divided among centres and states?

The inter-State seller will pay IGST on the sale of his goods to the Central Government after adjusting credit of IGST, CGST and SGST on his purchases.

Since GST is a destination-based tax, all SGST on the final product will ordinarily follow the consuming State.