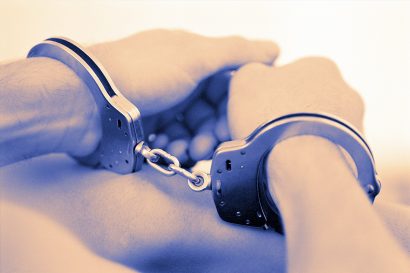 The Code of Criminal Procedure is also called the criminal procedure code (CrPC). This code was enacted in 1973 and came into force on April 1, 1974.

The criminal procedure code provides a mechanism for conducting trials in a criminal case. It gives the procedure for registering a complaint, conducting a trial and passing an order, and filing an appeal against any order.

The main objective of this code is to provide a fair opportunity to an accused person to conduct a fair trial according to the principle of natural justice.

The provisions of this code are to regulate the procedure for arrest and investigation, inquiry and trial of an offence under any law governing criminal offences in the court of law.

This code contains 484 sections under 37 chapters.

CRPC does not supersede any particular law or any local law or powers or procedure directed by any such law.

Application of the Criminal Procedure Code

It’s a machinery for defining procedures for determining the guilt or innocence of a person and collecting evidence.

It also defines jurisdiction in certain offences like offences committed by juveniles and also deals with public nuisance, maintenance of wife, children and parents.

It also describes the powers and jurisdiction of the courts and the offences triable by them.

The code of criminal procedure laid down some objectives. These are:-

There are some salient features of the criminal procedure code. These are:-

Need of code of criminal procedure

The Criminal Procedure Code (CrPC) is the machinery to address the need of the criminal justice system and ensure an effortless judicial process by defining the functions of executive and judiciary, respectively.

The code of criminal procedure 1973 is the machinery which fulfilled the needs for:-

All the magistrates deal with the issues of maintaining law and order and preventing crime. All the judicial magistrates function by being under the control of the high court.

The Criminal Procedure Code (CrPC) ensures the independence of the Judiciary from the legislature and executive. The judiciary is not under the control of any of the organs of the state.

The CrPC provides for a uniform set of courts in our criminal justice system throughout the territory of India by defining their jurisdictions, powers and functions.

The Supreme court and High courts are the constitutional courts of India with Jurisdiction, powers and functions.

The High Court can oversee the functioning of all the subordinate courts and tribunals in the concerned state.

Differences Between CrPC and IPC

The significant difference between CrPC and IPC is that IPC lays down the provisions for all the offences and punishments for committing those offences. In contrast, CrPC lays down the procedure followed in the investigation, trial and conviction of that offence.

IPC is substantive law, while CrPC is procedural law.

IPC aims to provide a penal code for punishment to the offenders, while CrPC seeks to make the penal code and other criminal laws more effective.

The Criminal Procedure Code (CrPC)provides for powers of courts and magistrates while IPC is silent on it.

Meanwhile, procedural law mentions remedies. Salmond stated that The Law of Procedure is the branch of the law that governs the process of litigation, and it is a law of action. The Substantive Law relates not to the litigation process but the subject matter.

Definition: Procedural Law is that branch of law that prescribes methods for enforcing rights or obtaining redress for their invasion; machinery for carrying on a Suit.

Examples of Procedural laws in India

Procedural Law provides the rules with the help of ‘which law is enforced’, and it determines what facts constitute proof of a wrong.

The Procedural Law describes the methods and requirements of the application of remedies to violated rights.

The law provides for a mechanism for gathering evidence by police and judges, conducting searches, arrests, bail, and presenting evidence at trial and process of sentencing.

The law of action includes all civil or criminal legal proceedings.

Section 2(b) of CrPC

This section states the charge definition under the Criminal Procedure Code (CrPC).

It states “charge” includes any head of ‘charge’ when the charge contains more heads than one;

Explanation: For example, Anish murdered Bikash. He also committed house dwelling theft, robbery, grievous hurt, etc. In this case, the Magistrate charges the accused with these offences. These offences are known as heads of charges, and individually these are known as ‘charge’. It is mentioned in section 2(b) of the Act.

These content of charge get explained in section 211 of CrPc. Under this section following conditions needs to be met:-

This section lays down the classification of courts having various jurisdictions other than high courts and other courts under this code. The following criminal courts are:-

(i) Courts of Session;

(iii) Judicial Magistrates of the second class; and

Section 125 of the Criminal Procedure Code (CrPC) is India’s most controversial and discussed topic. The main essence of the provision is that any person who has sufficient means to maintain himself cannot deny maintenance to his wife, parents and children.

Section 125 of CrPC: Provides provision for maintenance to:

A person having sufficient is obliged to provide maintenance to:-

(a) his wife, unable to maintain herself, or

(b) his legitimate or illegitimate minor child, whether married or not, unable to maintain itself, or

(c) his legitimate or illegitimate child (not being a married daughter) who has attained majority when such child is, because of any physical or mental abnormality or injury unable to maintain itself, or

(d) his father or mother, unable to maintain himself or herself.

Section 125 of CrPC deals with the maintenance of wives, children and parents. According to Section 125(1), the following persons can claim maintenance.

Grounds for claiming Maintenance for Women:

A wife can claim and receive maintenance from her husband in the below-stated conditions:

Muslim married women can also claim maintenance under the Criminal Procedure Code (CrPC) though they have a separate personal law for them (Muslim Women Protection of rights on Marriage Act).

Exceptions: A wife can not claim maintenance from her husband in the following conditions:

Some conditions to meet for claiming and granting maintenance:

Every information relating to the commission of a cognisable offence,

Every such information should get signed by the person giving it

Such documented information should get entered in a book to keep such an officer in the prescribed form.

Section 154 (1) CrPC clarifies that any information relating to the performance of a cognisable offence, if given orally to an officer in charge of a police station, shall be lessened to writing by himself or under his direction. All such information, whether in writing or reduced to writing, shall be signed by the person who provides it.

Section 154 (3) CrPC illustrates that a complaint shall be given in writing or by post to the Superintendent of Police if any person gets oppressed by a refusal of an officer in charge of a police station to record the information.

The Superintendent of Police, after receiving such a complaint, if satisfied that such information discloses the commission of a cognisable offence, should either investigate the case himself or direct an investigation to be made by any police officer subordinate to him in the prescribed manner provided by this Code.

Information as to non-cognizable cases and investigation of such cases.—

The High court in the case observed that to quash an FIR by exercising its power under section 482 of CrPC, the following issues to be kept in consideration:-

CrPC provides that every person is allowed a fair trial and hearing by an independent and unbiased Tribunal. The accused is considered innocent until proved the charges against him. The accused has the right to be represented by his counsel, and the accused also has a right to cross-examine the witnesses of the opposite party.

The Criminal Procedure Code and Indian penal code both lay down the foundation of the criminal justice system in India. The enactment of these legislations led to the consolidation of criminal laws in India.

They play their role in the ineffective administration of justice. The CrPC and IPC can be effective by applying the India evidence act 1965, a procedural law like CrPC.

The CrPC prevents violation of the principle of natural justice and delays in the investigation and trial process.

It also ensures that there must be a fair opportunity for hearing and disclosure of all the pieces of evidence and charges used against the accused.

Which section of the code prescribes for the trial of the offences under the IPC under the procedures of CrPC?

Section 4 of the code of criminal procedure 1973.

Which section of the code provides that the provisions of this code do not affect any special or local law or any particular jurisdiction or power conferred by any other law?

In which case did the supreme court observe that “speedy trial is a fundamental right of an accused”?

In which case does the apex court observe that the violation of procedural provisions does not deny the right of fair hearing?