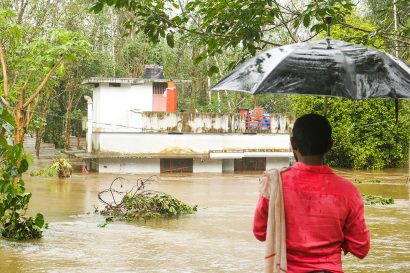 On December 23, 2005, the President of India signed the legislation having 11 chapters and 79 parts. Lets’ get into the depth of the Disaster Management Act and understand how it works.

According to the United Nations, a disaster is a significant disturbance in the operation of a community or society involving extensive human, material, economic, or environmental repercussions exceeding the affected community’s or society’s ability to manage by using its resources.

Hence, disaster management is the process of dealing with the human, material, economic, or environmental consequences of a disaster. It is the process of “preparing for, responding to, and learning from the implications of severe catastrophes.”

Disaster creates a cataclysmic scenario during which the regular rhythm of life and/or ecology has been interrupted, necessitating extreme emergency actions to rescue and protect people and/or the environment. Because of its geographical qualities, India is one of the world’s most disaster-prone countries. The social factors that control how communities live also impact how individuals get affected by risks.

Disasters can have human causes, even though nature cause disaster frequently. A disaster happens when a hazard affects vulnerable individuals, as per the International Federation of Red Cross and Red Crescent Societies.

Disaster comes from the confluence of hazards, susceptibility, and the failure to mitigate the possible adverse effects of risk. Natural catastrophes and armed warfare have long been a part of human history, causing peaks in death and morbidity.

Types of Disasters in India

As per the Disaster Management Act, major catastrophes are naturally occurring physical phenomena produced by either quick or gradual onset occurrences that directly affect human health and subsequent effects that cause more death and suffering. These calamities can include:

Environmental disasters that India is vulnerable to are earthquakes, floods, droughts, cyclones, tsunamis, landslides, and avalanches, according to India’s National Policy on Disaster Management.

Earthquakes strike over 59 per cent of India’s surface. Earthquakes, of course, cause massive losses when they occur with great magnitude, although they happen significantly less frequently.

Climate change is increasing danger and uncertainty right now. Floods, droughts and cyclones, on the other hand, occur year after year and create insidious harm simply because of their regularity and geographic distribution. As a result, it is critical to prioritise preventative and relief measures for severe catastrophes on a war footing.

Man-Made Disasters, as defined by the Disaster Management Act, are human-caused calamities that occur in or near human populations, frequently as a result of Environmental or Technological Emergencies. It includes things like:

During the Colonial regime and the years following independence, disaster management was mostly restricted to post-disaster relief activities, food-for-work programmes and overseen by a Central Relief Commissioner who oversaw the State Relief Commissioners.

Following the United Nation’s designation of the International Decade for Natural Disaster Reduction in the 1990s, a disaster management cell got established. Later, it got transferred to the Ministry of Home Affairs.

The Disaster Management Act explained disaster management as an integrated process of planning, organising, regulating, and implementing procedures that are required for:

India gets confronted with a variety of natural calamities to varying degrees. Earthquakes of moderate to very high-intensity strike around 59 per cent of the continent.

About 12% (about 40 million hectares) of its land is vulnerable to flooding and river erosion. Cyclones and tsunamis are a threat along about 5,700 kilometres of the 7,516 kilometre-long coastline.

Droughts threaten 68 per cent of its arable lands, and steep areas are subject to landslides and avalanches. Furthermore, India is prone to chemical, biological, radiological, and nuclear (CBRN) catastrophes and other man-made calamities.

In India’s national structure, the duty for formulating the regulations on a natural catastrophe falls mainly on the affected State government. Through its material resources, the Government of India provides the necessary assistance and support to bolster relief operations in the aftermath of significant natural disasters.

The dimensions of the reaction at the Central Government level get established per the current policy of financing relief spending and taking into account criteria such as:

Man-made disasters, as opposed to natural disasters caused by natural hazards, involve an element of human intent, neglect, or error involving a failure of a man-made system.

Elements of Disaster Management in India

By implementing basic preventative measures, disaster risk reduction techniques have the potential to save thousands of lives. The lack of coherence in disaster reduction efforts and the absence of a “culture of preventive” are the primary drivers of rising catastrophe casualties.

Disaster risk reduction (catastrophe reduction) has been defined as “the systematic creation and deployment of policies, methods, and practises to decrease exposures, perils, and the unfolding of disaster consequences throughout a society, within the framework of long-term development.”

Mitigation entails taking steps to lessen the effect of disasters. Efforts to keep dangers from becoming disasters in the first place. It differs from the previous phases in that it focuses on long-term risk reduction or elimination approaches. It encompasses activities performed before a disaster to mitigate its consequences on a community.

Various unique programmes for minimising the effects of natural catastrophes are in place, and local communities have created their indigenous coping techniques. In the case of an emergency, the mobilisation of community action, aided by non-governmental organisations (NGOs), strengthens the national disaster management capabilities. Despite the implementation of different catastrophe mitigation strategies, there has been little progress.

When recovery efforts get added to routine services in the long-term aftermath of a disaster, it entails executing steps to encourage long-term redevelopment (reconstruction, rehabilitation). Its focus differs from the response phase; recovery efforts focus on challenges and decisions that must be made after urgent needs are met.

Recovery activities generally get focused on operations, including the reconstruction of lost property, re-employment, and the restoration of other critical infrastructure.

It focuses on where the action is required and the institutional mechanisms to implement such action. The NPDM addresses the problems of all sections of the community, including people with physical disabilities, women, children, and other vulnerable groups.

The topic of equity/inclusiveness has been given appropriate consideration in providing aid and developing methods for rehabilitation disaster-affected people.

In support of the Disaster Management Act, the NPDM creates a safe and disaster-resilient India by implementing a comprehensive, proactive, multi-disaster-focused and technology-driven plan based on prevention, mitigation, readiness, and response culture.

The Army’s involvement in disaster management is critical. Even before civilian resources get deployed, it is among the first responders in a catastrophe event. India’s unique geo-climatic circumstances make it very vulnerable to natural disasters.

Disaster management is a top priority for governments all around the world nowadays. Part of this is that the public is becoming more aware and knowledgeable about catastrophes and tragedies.

Defence forces is a federal form of government that are ultimately answerable to the head of the state, are supposed to carry out any commands handed to them.

Trained soldiers get educated to disregard their status and mental state to carry out their responsibilities regardless of the anguish caused or the problems encountered. This devotion, along with their training, might prove to be a tremendous tool for disaster planners.

The primary responsibility of the military forces in disaster management is to carry out rescue operations and evacuate civilians. The fact that they are always the first responders to each tragedy is a big problem for them. There is a need for improved collaboration between the military services and other government and civic groups in the region.

Some major Disasters in India

It is critical to design ways and strategies to manage and minimise the effects of natural catastrophes as feasible, highlighting that environmental issues and Disaster management go hand in hand. In addition, human-caused catastrophes, such as fires, accidents, and epidemics, are just as abrupt and maybe just as catastrophic as natural disasters.

However, to a certain extent, natural cacophonies might be prevented by forecasting the changes in the environment. Still, the hazards arising due to the negligence of man could not get prevented. Hence, making it all the more dangerous.

State the goal of the Disaster Management Act?

The primary goal of the Disaster Management Act is to prevent or avoid possible loss caused by a hazard or catastrophe. Also, so that rapid, appropriate, and timely procedures for successful recovery can get done.

In India, which authority is in charge of disaster management?

The National Disaster Management Authority (NDMA) is India's highest agency in charge of disaster management. The Prime Minister of India is in order of the NDMA.

What is the primary cause of natural disasters in India?

Is it essential to manage disasters?

Yes, as they leave an everlasting impact on both humans and the environment.