FORGERY: A Document that is void ab initio 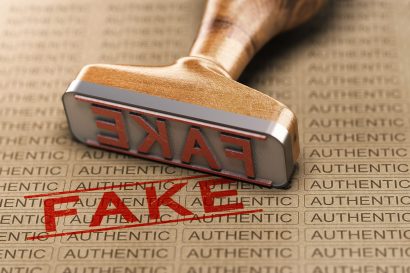 Forgery gets defined under section 463 of the Indian Penal Code, 1860.

“Whoever makes any false document or false electronic record, with intent to cause damage or injury, to the public or any person, or to support any claim or title, or to cause any person to part with the property, or to enter into any express or implied contract, or with intent to commit fraud or that fraud may be committed, commits forgery”.

It gets implied as forming a forged document or record with an evil intent to cause injury to any person or property to support any forged claim or title.

So, forgery gets done to mislead someone into believing the inaccuracy. It also gets done to commit identity theft by acquiring personal data of a person and using that data for deception & monetary gain.

As per section 464 of IPC, A false document is,

A document signed, sealed, stamped, or marked indicating the execution of that document without the proper authority; with a dishonest intention, to make the other party believe that such sign, seal and execution is done by the authority of the person authorised to do so it.

Whoever fraudulently or dishonestly causes anyone to sign, seal, execute, or reconstruct a document knowing that person is unsound mind or intoxicated. For this reason of this deception, he fails to understand the content or nature of the alteration.

There are four elements to establish a case of forgery,

It consists of a sign, seal, or stamp to create fake documents for execution without the person’s authority to authorise it.

There must be an element of deception; it cannot get established without the act of misleading and deceiving another person.

A document obtained or made without any intention to deceive or cause harm to anyone does not amount to forgery.

Section 465 of the Indian Penal Code, 1860 prescribes punishment for the offence.

According to the section:

“Whoever commits forgery shall be punished with imprisonment of either description for a term which may extend to 2 years or with fine or with both”.

The offence is Non-cognizable, bailable, triable by a magistrate of first-class and non-compoundable.

Some Illustrations of Forgery

It is alteration, concealing or destroying of records. So, here are some illustrations,

The offence of forgery

When committed in an aggravated form, it is dealt with in sections 466 to 469, like forgery of a court record, public register, valuable security, will, etc. However, punishment varies in each case.
Section 471 fixes the liability of the accused person by verifying whether he/she knows that such a document got forged. Whereas 472 to 476 deal with cases of making counterfeit seals, plates or instruments used for creating forged documents.

The offence of forgery defined in section 463 gets subjected to section 464 of IPC.

Section 464 states that the act should get done fraudulently and laid elements to satisfy and states a document as forged and false.

Section 465 of the IPC prescribes the punishment for the offence as imprisonment up to 2 years along with a fine.

Certain cases where the forgery gets committed in the aggravated form gets dealt under sections 466 to 469 of IPC. The burden of proof is on the prosecution to prove the accused guilty beyond a reasonable doubt.

Which section of the Indian Penal Code, 1860, defines the document under the category of a forged document?

What is the punishment for forgery of valuable security, will, etc.?

Imprisonment up to 7 years and fine under section 477 of Indian Penal Code, 1860.

In which Madras high court held that using a forged passport as genuine to gain entry into India is a punishable offence?