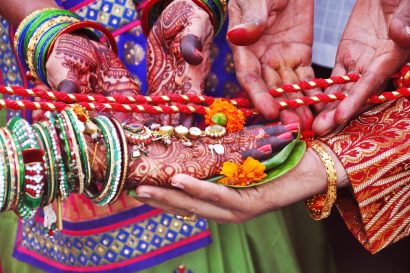 India is a diverse country. In India, family law does not vary from state to state. A single system of the law directs every community. Even if the community members are settled, domiciled or resided in any part of the country, a single law system will govern them. But there may be a variation in the law related to castes, sub-castes or sub-sects. It is based on the customs which create variations among groups.

Prevailing from the Vedic age, in Hindu custom, marriage refers to Kanyadan. According to their tradition, the bride’s father gets her daughter (Kanya) married to the bridegroom. The ancient tradition of gifting daughters through marriages is still practised in our country.

The Hindus follow Hindu law. But it is not the fundamental Hindu law that applies to Hindus in India and is an altered and modified law that has altered a substantial portion.

The Hindu Marriage Act got enacted to guard the rights of marriage between Hindu bride and groom bound together under the sacred bond of marriage. The law has not mentioned the kind of ceremony required as there are several ways in which a man and woman can get married under the Hindu religion custom.

The fraud case and humiliation faced by people in the name of marriage drifted to the act. So, the act binds any person who is Hindu, Jain, Sikh, and Buddhist person. It does not affect Muslims, Christian, Parsis, Jew, as other laws govern them.

So, the Hindu Marriage act binds Hindu by Birth or Hindu by Religion.

Who is a Hindu?

Section 2 of The Hindu Marriage Act defines the meaning of Hindu.

The section states that the Act applies to any Hindu by religion or has converted his/her religion to any of its forms such as Virashaiva, a Lingayat or a follower of the Brahmo, Prarthana or Arya Samaj.

The act applies to any person who is a Buddhist, Jaina or Sikh by religion. It also extends to any other person living outside this territory who is not a Muslim, Christian, Parsi or Jew by religion. It is proved that the Hindu Law governs such a person.

According to the Act, stated persons are also known as Hindus.

Conditions for a Hindu Marriage

Section 7 of the Hindu Marriage Act

Section 7 of the Hindu Marriage Act states the ceremonies for a Hindu marriage.

According to the Act, a Hindu marriage shall get solemnised according to customary rites and ceremonies of either party. The ceremonies include Saptapadi (taking seven steps by bride and bridegroom together jointly around the sacred fire), and marriage becomes complete and binding when they take the seventh step together.

According to the law, the marriage between two persons is valid if they get married according to the customary rights and ceremonies. The child born after marriage is legitimate, and the father has to protect and bring up the children.

Section 9 of the Hindu Marriage Act

The essential requirements of section 9 under the Hindu Marriage Act:

Section 9: When either the husband or the wife has, without reasonable excuse, withdrawn from the society of the other, the aggrieved party may apply, by petition to the district court, for restitution of conjugal rights and the court, on being satisfied with the truth of the statements made in such petition and that there is no legal ground why the application should not be granted, may decree restitution of conjugal rights accordingly.

In the ancient period, marriage was considered sacred and an insoluble union of two persons. According to Manu, a wife’s duty continues even after her death. According to the custom, she should never have a second husband. The provision of granting divorce was established in The Hindu Marriage Act, 1955. According to the Act, divorce means dissolution of the marriage.

The aggrieved party can approach the court to dissolve the marriage and seek remedy. In Hindu law, the grounds for divorce are provided under section 13 of the Hindu marriage act 1955.

Section 13(2) of the act provides the grounds for a wife approaching the court for a divorce.

Section 13 of the Hindu Marriage Act provides the grounds for divorce, and they are stated below.

New rules for divorce in India

In the Akansha v. Anupam Mathur case, the Supreme Court stated that the six months period according to section 13(B) is not mandatory but discretionary. Adultery, a ground for divorce which was punishable earlier, is now not punishable.

The Supreme court of India struck down the penalising provision. Triple Talaq amounting to divorce by a Muslim man cannot be a basis for divorce. The Supreme court held that Triple Talaq is unconstitutional. No-fault divorce legislation was given assent and became an act of the Parliament in 2020.

Native Marriage Act, also known as The Indian Christian Marriage Act, 1872, is the law related to the solemnisation of people’s marriages in India professing the Christian religion.

Condition for a valid marriage

According to section 10 of the Act, The court may grant a divorce under any of the following grounds:

The parliament amended the act to add section 10A for filing a petition for divorce on mutual consent in the District Court.

The Divorce Act includes provisions governing custody of children in cases of dissolution or nullity of marriage. Section 41 of the Act permits courts to make interim orders concerning child custody, and the court may award custody to any particular party even after passing a final separation decree.

The Hindu Marriage Act governs the provisions related to Hindus. Meanwhile, Muslims and Christians also have a law that governs their procedures. The modern Hindu law has undergone many alterations by judicial interpretations and legislative modifications.

The Hindu Marriage Act got enacted to safeguard people’s interests belonging to the ‘Hindu’. But, the codified and uncodified law does not apply to scheduled tribes as their tribal customs govern them.

Where are the conditions for a Hindu marriage mentioned?

The conditions for a Hindu marriage are mentioned under section 7 of the act.

Which section of the Hindu marriage act 1955 mentions the special provisions regarding the trial and disposal of petitions?

Is a document admissible as evidence under the Hindu marriage act 1955 if it is not duly stamped or registered?

yes, a document is admissible in the court as evidence even if it is not duly stamped or registered as per the provisions of section 21C of the act of 1955.

What is a maintenance pendente lite?

It is maintenance provided to the petitioner (i.e. children, wife, etc.) as financial support during the pendency of a suit.