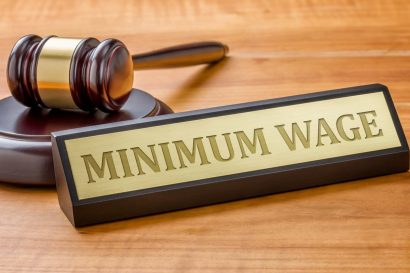 It is an act of parliament enacted to ensure a minimum wage for skilled and unskilled workers employed in industries, factories, any place of business or other establishments.

The act ensures that their employers do not exploit employees in any type of establishment or industry.

The central government is empowered to make rules related to the minimum wages for the scheduled employment under this act; the least amount of remuneration required to be paid to an employee by an employer for a given period cannot be reduced by collective agreement or by an individual contract.

The act is applicable throughout India.

It also applies to all industries, places of business, business establishments, factories, etc.

Unscheduled employments are generally excluded from the purview of this act but,

A state government is empowered to add employment in its schedule of employment.

It will also apply to any employment, employing a minimum of 1000 employees in that particular state.

It does not apply to employees under any undertaking owned by the central government or federal railway.

States fix minimum wages in India by considering the economic factors, working conditions, living standards of labourers, cost of living, nature of work, etc. so, it differs according to states.

These wages paid to labourers are combined with VDA, i.e. Variable dearness allowance.

The Variable dearness allowance is the amount of remuneration required to pay to an unorganised sector employee after increasing or decreasing the consumer price index(CPI).

Currently, the average minimum wage in India lies at Rs 176/day for an eight-hour workday.

All workers, i.e. unskilled, semi-skilled or skilled, etc., get entitled to the wages.

How is the minimum wage calculated in India?

The minimum wage act in India works to achieve a particular target and ensure that workers are provided with these wages to meet their basic needs.

It also gets termed as the living wage, which will allow him to meet the basic needs of life like Hygenic and standard living, food, education for kids, access to basic healthcare facilities, dignified and comfortable living, and provide for them any contingency.

Minimum wages in India get fixed on specific criteria:-

Minimum wages in India are calculated based on some norms suggested in the 15th labour commission meeting held in 1957 headed by sh. Gulzari Lal Nanda.

In 2019, a new panel suggested new criteria for calculating minimum wage in India, although it is not yet implemented. These include:

Why does India have no national minimum wage?

The welfare of labourers in all employment categories, whether skilled, semi-skilled or unskilled, is considered a state or central government subject. So, it is a multi-jurisdictional issue.

According to the code of wages act, 2019, minimum wages should get received by state governments.

A state government can better understand the cost of living, expenditure, working conditions, and living conditions in scheduled employment.

State governments are empowered to fix this base pay independently within their jurisdiction.

Different states have different economic conditions and infrastructure and government policies regarding the welfare of workers, so the base pay continuously varies as per the states.

It is not even practically possible to implement a national minimum wage for all the workers throughout the country and ensure its implementation.

That is the reason India has no national minimum wage.

As per the minimum wages act, if a worker is underpaid or not paid minimum wages, he can complain to the labour commission. And if the employer is found guilty of the offence, he will be punished with imprisonment up to six months and/or with a fine extending to five hundred rupees or both(Section 22).

An offence with no penalty gets provided for such violation will be punishable with a fine extending to five hundred rupees(Section 22A).

But the new code on wages, 2019, although not have come into force yet, the maximum punishment for non-compliance is prescribed as three months imprisonment with a fine of up to one lakh rupees.

The state governments/UT have the power to fix and revise these wages along with VDA (variable dearness allowance) for the scheduled employments in their respective areas of jurisdiction.

Some states/UTs also varies minimum wage in specific zones, and these wages differ from state to state.

Here are some examples of minimum wages along with VDA in different states and Union territories.

Even after having legislation for enforcement in payment of this base pay to workers to ensure a standard life for them, our government lack behind in many sectors to provide these workers with adequate wages and provide them for any contingency or any basic needs.

The penalty under the act is also trivial with fewer penalties; that’s why the government of India came with a new reform in this aspect and came with a code on wages, 2019.

The code on wages, 2019 is an optimistic step for the payment of minimum wages in India by giving them statutory backing and removing confusion by focusing on this code rather than having so many labour laws to ensure the welfare of labourers.

What is the standard working hours in a day for scheduled employment?

The standard working hours for scheduled employment are 9 hours per day, including one-hour lunchtime. If the person exceeds the work time beyond 4 hours and less than 8 hours, the worker will receive full wages.

Who are the persons entitled to file claims under this act?

An individual employee, trade unions, or labour inspectors can file claims in the presence of authorities.

When VDA got introduced and why?

VDA (Variable Dearness Allowance) was introduced in 1991 to safeguard wages against inflation by linking them to the cost of living index.

In which case the apex court laid it that if an employee gets paid wages more than the minimum wages as fixed, they are not required to pay VDA separately?