Pesa Act: The saga of Gaining Greater Autonomy, the ACT For The Scheduled Areas 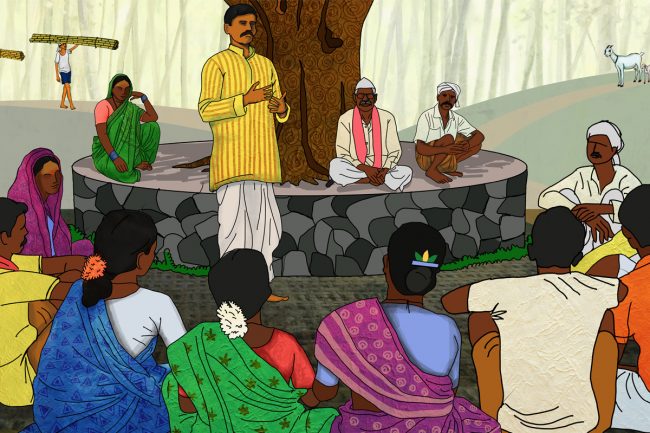 PESA full form is Provisions of the Panchayats (Extension to the Scheduled Areas) Act.

But, the Parliament can extend the said provision to the specified tribal areas bearing in mind certain exceptions.

Hence, to extend the benefits of the Panchayati Raj System to such Adivasi regions, the legislators legislated “Provisions of the Panchayats (Extension to the Scheduled Areas) Act”, 1996, commonly referred to as “PESA Act” or “the Extension Act”.

Presently, the Fifth Schedule of the Constitution covers the following 10 Adivasi regions, namely:

The government of India legislated The Provisions of the Panchayats (Extension to Scheduled Areas) Act, or PESA act 1996.

The act intended to ensure autonomy by adapting the customary Gram Sabhas administration system for the people residing in such Scheduled Areas of India.

Initially, under the 73rd Constitutional Amendment, which laid down the foundation for the Panchayati Raj System, scheduled areas did not find a place.

Article 243 (M) of the Constitution made sure to restrict the amendment applicable to the scheduled areas.

After establishing the Bhuria Committee in 1995, the PESA ACT 1996 came into existence and reassured the self-governance of Adivasis.

The PESA Act aimed to operate the Panchayats at the required levels. The Act would aid Gram Sabha to regulate primary tribal concerns like traditional resources, forest supplies, minerals, water resources etc. The PESA act got perceived as a positive outcome for the upliftment of the scheduled area.

For a considerable period, these socially excluded people suffered immensely at the hands of archaic colonial statues even after the independence of India. They were rendered vulnerable at the loss of forest, water and land resources overtaken under the veil of development.

Unrestricted acquisition of land and other resources for the pragmatic generative projects leads to wide displacement of tribal people residing in Scheduled Areas.

Hence, The PESA Act came as a remedy to heal these vulnerabilities and established a paradigm shift.

The prime aim of the said act was to restore the right of autonomy lost to the exterior legislatures.

Gram Sabha as a Focal Point:

The governmental body in Gram Sabha was established and made the focal point of democracy and liberty.

With newly gained power, the Adivasis could now engage their culture and traditions in the decision making and hence, preserve them.

The act’s utmost important feature was to mandate the prior discussion with the people residing in the scheduled areas before acquiring their land.

Other than this, the Act empowered the tribal people with the ownership of “minor land produce”, local dispute resolution and managing their rural and traditional markets.

Though the PESA Act returns the autonomy to the scheduled areas, the regional authorities get obliged to enact state laws. Hence, leading to the fragmentary implementation of self-governance that further worsens the conditions of Adivasis.

It’s observed that the implementation of the PESA Act faces legal challenges and political resistance. It makes the working of the Act unclear.

Social audits shattered the colourful image of the implementation of the PESA Act. Pragmatically, the growth projects are granted pseudo approvals, just on the papers, without real discussions and permissions with the members of Gram Sabha in these scheduled areas.

Culture is the fundamental identity of a man and something that distinguishes one community from other. Thus, culture is integral to a man and must get preserved at all costs. India is the land of various cultures, and the preservation of all is a must.

With one such aim, the Constitution framers set few areas under the fifth schedule and termed them Scheduled Areas.

The importance of scheduled areas is as follows:

It is a rural body comprised of all the eligible voters residing in that particular area of the panchayat. Villagers 18 years old or more in age and registered with a right to vote are eligible to be the member of the Gram Sabha.

Gram Sabha holds immense importance under the Panchayati Raj System. It is because of the following functions performed by it:

One of the main functions of the Gram Sabha is to look after the villagers’ needs and undertake various developmental strategies to grow and develop the village to cater to the contemporary need of the people residing in the village. Likewise, in the scheduled areas, the Gram Sabha works as planned and tribal area administration.

Gram Sabha is known as “the custodian of the village’s public property” for administrative functions. For the said purpose, it is must discuss the propositions concerning the land acquisition in the scheduled areas with the Gram sabha before proceeding further with the proposal.

Among other responsibilities, Gram Sabha’s presence is essential in maintaining law and order in the village.

It mediates the resolution of disputes that broke out amongst the locals. Further, it holds the elected representatives accountable and answerable to the people electing them as their representatives.

Out of thirty members, four members get nominated by the Governor and hold office for five years.

Scheduled Areas are those States which the President may announce as Scheduled Areas after the recommendation of the Governor of such States. In contrast, the districts in the States of Assam, Meghalaya, Tripura and Mizoram, which enacts “Regional Autonomous Councils” for the said districts, are called Tribal Areas.

While altering the PRI Acts, seemingly, the State of Orissa partially complied with the PESA. The obligatory legal provisions empowering such Adivasis, through the institution of Gram Sabha, with jurisdiction over local resources, licensing of minor minerals and land procurement by the government were not adhered to.

Despite the advantages, the new Act faced opposition. It argued that the implementation of the Act led to frequent amendments. It came out to be a mere beautification of the Panchayat System in the districts of Orissa without devolving actual power to them. It accentuated the darker and unrevealed side of the PESA Act.

India is the land of diverse cultures, traditions and communities. The Constitution of India guarantees each such community equality. Hence, for a very long time, tribal people or Adivasis were denied this equality. They were subject to rules that had no purpose for them and exploited them.

The PESA Act 1996 got enacted to restore equality and enable the protected states under the fifth and sixth schedules to govern their territories.

The primary objective of the Act was to conserve and preserve the culture and traditions so dear to them. Thus, safeguard the identity of the scheduled and tribal areas by extending the system of self-governance to their territory.

But, in actuality, the Adivasis have time and again knocked on the doors of the Apex Court to safeguard their rights exploited in the name of contemporary development. It highlights the fact that the legal provisions so enacted does not suffice.

What constitutes the “Minor Forest Produce”?

How is a village formed under the PESA Act?

The area initially inhabited by the group of hamlets is considered a village under the PESA Act.

Who is the secretary of Gram Sabha?

How many States get covered under the Sixth Schedule of the Indian Constitution?

Does PESA Act empower the Gram Sabha in the Scheduled Areas to look after fisheries, if present in that area?

Yes, Gram Sabha manages and looks after all the local resources.