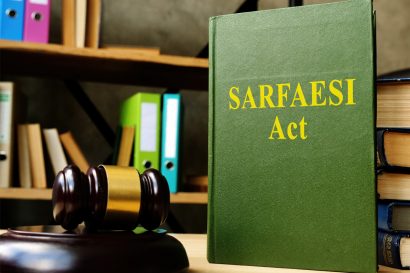 When the banks and financial institutions indulge in their lending activities with or without securities, it improves its economic base and competes with the sister concerns. The element of recklessness crept into the system when prudential norms seldom followed, damaging its very existence in the rat race to earn profits and business.

The country’s laws are sufficient and efficient enough to protect the Banks and FI’s interests. Due to mushrooming number of trade and business activities flourishing, it was necessary for the speedy recovery of the dues of the Banks, as liquidity would be affected, ruining the very existence of the concerned financial institution.

And then there was a thought of empowering such Banks and FI’s to recover its dues on its machinery and mechanism, to prevent the excessive delays involved in court proceedings.

SARFAESI Act 2002 was a great boon to the Financial sector, enabling them to recover their dues through an in-house procedure and process.

Securitisation and Reconstruction of Financial Assets and Enforcement of Securities Act is known as SARFAESI Act.

Under SARFAESI ACT 2002, the banks got empowered to recover their loans without the court’s intervention.

However, some of the fiscal Acts provide for recoveries of the dues through their mechanism, as provided under the respective legislation, like the Revenue recovery Act, The Income Tax Act, and similar laws in vogue. But the banking sector did not get empowered with such a tool till the enactment of the above Act.

Then the Central Government constituted the Narasimham Committee I and II and the Andhyarujina Committee to examine banking sector reforms to find a solution to the growing defaults and recoveries to consider the need for changes in the legal system in respect of those areas.

What does the SARFAESI Act provide?

It gets intended for Facilitating securitisation of financial assets of banks and financial institutions with or without the benefit of underlying securities.

It empowers for entrusting the Asset Reconstruction Companies to raise funds by issuing security receipts to qualified buyers.

It facilitates the reconstruction of financial assets which are acquired:

It defined ‘security interest’ as any type of security, including mortgage and change on immovable properties given for repayment of any financial assistance provided by any bank or financial institution.

It suggests the classification of the borrower’s account as a non-performing asset per the directions given or under guidelines issued by the Reserve Bank of India from time to time.

It gives power to the officers authorised, who will exercise the rights of a secured creditor on this behalf following the rules made by the Central Government.

It gives the Central Government powers and may set up or cause to get set up a Central Registry to register transactions relating to securitisation, asset reconstruction, and creation of the security interest.

The Act applies initially to banks and financial institutions and empowerment of the Central Government to extend the application of the proposed legislation to non-banking financial companies and other entities.

It excludes security interests in agricultural lands, loans less than rupees one lakh, and cases where the borrower repays eighty per cent of the loans.

In a nutshell, the SARFAESI Act 2002 has the following objective

Efficient or rapid recovery of non-performing assets (NPAs) of the banks and FIs.

Allows banks and financial institutions to auction properties (say, commercial/residential) when the borrower fails to repay their loans

Important Definitions under the SARFAESI Act 2002

It defines a Bank: “bank” means—

It defines a borrower: “borrower” means any person:

It reads “Debts Recovery Tribunal” means the Tribunal established under sub-section (1) of section 3 of the Recovery of Debts Due to Banks and Financial Institutions Act, 1993 (51 of 1993).

It speaks about Financial Institutions covered under the SARFAESI Act 2002.

The section defines the meaning of hypothecation, which is a present or future charge on the borrower’s assets.

It is essential in as much as the “non-performing asset” gets defined therein.

“Non-performing asset” means an asset or account of a borrower, which gets classified by a bank or financial institution as sub-standard, — [doubtful or loss asset]

The definition of Property is essential as to what gets covered under the SARFAESI Act 2002 upon which the lender agency could bank upon and take recovery measures.

According to the section, “property”; means—

The SARFAESI Act 2002 also defines a Reconstruction company that takes charge of the non-performing assets and sells it away to recover the dues of the lender concerned.

Similarly, a Secured creditor also gets defined, which includes the notified banks and Financial institutions whose lending have been secured with security tangible or intangible as may be applicable.

The procedure of enforcement under the SARFAESI Act 2002:

Section 13 of the SARFAESI Act 2002 is the enabling section under which the Banks and Financial Institutions could recover or reconstruct their non-performing assets.

As such, the creditors enjoy the power to recover their NPA’s through its machinery.

Under the SARFAESI Act, 2002, the creditors get conferred with the right to seize the secured asset and sell off the same to recover dues promptly by passing the costly and very time-consuming legal process through courts.

The legal provisions get quoted below:

Amendments to the SARFAESI Act 2002

Important amendments to the SARFAESI Act 2002 is Section 13(8), which provides as follows:

Thus the debtor has a last resort to get back his assets taken over in the SARFAESI proceedings by paying the secured creditor before the sale thereof.

After issuing notice to the defaulting debtor, the Banks and FI’s could initiate their recovery mechanisms through the appointed Recovery officer of the institution. He acts with quasi-judicial powers and puts the process of recovery in motion.

Under Section 13(2) of the SARFAESI Act 2002, a time limit of 60 days is given to the borrower to answer the notice. On the other hand, the borrower could approach the Debt Recovery Tribunal constituted under the DRT Act on various grounds of irregularities and other valid reasons against the process initiated by the recovery officer.  Even after such possession of the properties, the borrower can apply to the DRT under Section 17 of the SARFAESI Act 2002 for redressal of grievances due to irregularities conducted by the Bank or FI  exercising powers for attachment and sale of the properties charged.

The minimum amount for the claim in the DRT is Rs 20 lakhs. No upper limit. Below such an amount, the creditor will have to approach the civil courts for recovery.

When the borrower approaches the High court or Supreme court, such courts shall pass no interim order without hearing the creditor in detail in appeals and cross-appeals. This intervention by higher judiciary fails the very purpose of the SARFAESI Act 2002 as was held by the Honorable Supreme court

To conclude, the SARFAESI Act 2002 has been a blessing for the Banks and Financial Institutions to recover their dues in a summary manner without entwining in long civil battles in the courts of law.