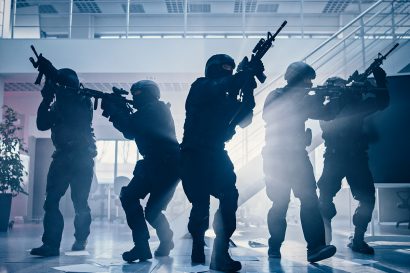 The act purposed to contain the Khalistani Movement, a form of religious terrorism, active in Punjab. Later, the act took other states under its ambit as well.

Terrorism refers to the illegal usage of violence against the general public to achieve political supremacy. The word ‘Terrorism’ contains no unified definition. Hence it has multiple definitions attached to it. Generally, it is understood as a disturbance in peacetime in war to fear the civilians.

The terms “terrorist” and “terrorism” first found their usage during the French Revolution in the 18th century, into common usage internationally.

During its stay of two years, the TADA Act provided the definition for terrorism for usage in India and justified the punishments granted to the convicts. The ambitious act even created certain special provisions to prevent terrorism in India.

Diverse organizations get charged with spreading terrorism to fulfil their purposes. Some include “right and left-wing political organizations, national groups, religious groups, revolutionaries and ruling governments.“

The multiple causes of terrorism lead to devastating aftermaths. These severe effects of terrorism stay with humanity for quite an extended period.

On the threshold of the 21st century, the problem of terrorism has intensified multi-folds. With the introduction of contemporary technologies, the hare of terrorism is winning, and the tortoise of law is lagging.

For better understanding, attributes of terrorism could be summed up as:

The primary aim of terrorism is to create a threat by violence. The intent is to pressurize the political chief to fulfil the immoral motives of the terrorists.

Another feature of terrorism is to change the status quo per se. The terrorists initiate an attack to take over the political affinity.

Terrorists typically attack customarily crowded public places. The purpose is to create fear in the minds of people about their safety. The spectacle is to threaten the political hold of the authorities.

By attacking the civilians, the terrorist groups want to set an example of power. They want people to fear them.

Some of the ways adopted by the terrorist groups are:

In the words of the Home Ministry, terrorism in India is a potential threat to Indian citizens.

India, allusively, fears a broad spectrum of terror groups that include “Islamic terrorism, Separatist terrorism and left-wing terrorism.” In addition to it, a new aspect of terrorism, namely, Cyber Terrorism, took birth a few years back. It is the concomitant of the enhanced technological advancements.

India’s encounter with terrorism and violent extremism gets witnessed back in 1947. The partition based on religious outlines induced endless violence, ethnic riots and ever since has been at the point-blank of all the terrorist attacks.

Pakistan’s penchant for Kashmir prompted an eternal territorial dispute between the two nations. The vehement rejection of each other’s claims never lets the dispute end. Thus, is marching cross-border conflicts give rise to other terror attacks as well.

Apart from terror attacks by the Islamic community in Kashmir, historically, India also witnessed Sikh separatists in Punjab and Secessionist Groups in Assam. Presently, the violence could be found in Jammu and Kashmir, east-central and south-central India, in the form of Naxalism and the Seven Sister States.

Types of Terrorism in India

Violence initiated by the groups that rebel against the government of a country refers to as Dissent Terrorism. On several occasions, the Apex Court pointed out the usage of the Anti-Terrorism Laws in India to “quell the dissents“.

For quite long cross-border terrorism interrupted India’s internal peace. It refers to when “one country threatens, creates violence or engages in terrorism against its neighbouring countries across the border“, as in India and Pakistan.

The formation of terror groups with the sole motive of earning profits through terror activities refers to as Criminal Terrorism.

Impact of Terrorism in India

Like any other developing country, the impact of terror attacks in India is vicious. Since its independence, India has faced various major attacks, but the 26/11 Bomb Blasts tops the list. The consequences of the said attack could get briefed as follows:

Reportedly after the attack of 26/11, the famous Elephanta festival altogether stopped for nearly nine years. The security concerns prohibited the celebration. The said attack blew the Indian tourism as a significant number of foreign nationals died in the attack. It blew the tourists away.

The terror attacks drastically affect the peace and tranquillity of the nation. After a major attack public ponders over security issues which leads to distrust; additionally, it violates their right to peaceful enjoyment and right to life.

For developing nations, violence costs more than it appears on the surface. The shortage of funds pushes it into deterioration and poverty. At the time, it becomes impossible to recover and emerge forward.

The terrorist attack or terrorism leaves a permanent mark on society and humanity. It is impossible to give an all-inclusive account of the aftermath. But, broader aspects could get encapsulated as:

Trauma that follows the terrorist attack could not get compensated. Not only the victims rather society as a whole are traumatized. Physically harmed victims show symptoms of psychological traumas like mental decomposition or collapse.

Demonstration of trauma at the communal level exhibits varied forms of community dysfunction. “Abuses such as torture or ethnically-targeted violence may create an order based on imminent pervasive threat, fear, terror, and inhibition.”

Countries nurturing terrorist activities bore substantial economic losses. The erupted trade and society need finance to rehabilitate. The amount which could have been spent on the developmental and growth opportunities gets utilized in rejuvenation and rehab. A study states that a country lags 100 years behind while mending a single terrorist attack.

All the terrorist activities lead to the violation of human rights. Humans are entitled to enjoy their life while the violence created by terrorists violates it.

How to deal with Terror Act

TADA Act or Terrorists and Disruptive Activities (Prevention) Act accounted to be the first anti-terrorism legislation enacted in India.

Enforced in the year 1985, it remained in effect till the year 1995. The act purported to curb the Khalistan Movement and Bombay Blasts.

Provisions Of the TADA Act

The few relevant provisions of the act are:

It laid the definition of the Terrorist Act.

It includes the punishment for the terrorist attack. The sentence could be imprisonment for a period not be less than five years and a fine. It even made a provision for life imprisonment.

The promulgated the enactment of special courts for hearing the terrorist cases. The proceedings of such a court might get recorded, and the identity of the accused remained concealed.

The accused terrorist had no access to bail except for reasonable grounds. Lastly, the policy had the liberty not to produce the accused before the magistrate between 24 hours. They could even detain the accused for a year.

Due to the numerous controversies, the Act stood repealed and a new Act entitled Prevention of Terrorist Act (POTA) came into being. Lacking the necessary power to curb the menace of terrorism, soon there was a need for a better version.

At last, the Unlawful Activities Prevention Act came into being with a promise to do away with the terror caused by terrorism.

The said case emerged as the most celebrated case of an Indian terrorist to be solved by TADA Act.

An Indian national, Yakub Menon, worked as a chartered accountant in Mumbai. His association with the Mumbai bomb blasts in 1993 made him a high-profile Indian terrorist. He was highly educated but came to be a high-profile terrorist in the Mumbai Blasts, 1993.

Reportedly, he conspired the blasts and financially aided the operation. From booking the to and fro tickets to overlooking the count arms and ammunition, he managed everything. He even purchased and equipped the vehicle to be used for blasting.

The Central Bureau of Investigation (CBI) claims that Yakub got arrested on 5th August 1994 at New Delhi Railway station. Contrary to this, Yakub claims that he surrendered to the police in Kathmandu, Nepal, on 28th July 1994.

Justice P.D. Kode tried him under TADA Act. The bench charged and awarded punishments for the following offences:

Revoking section 19 of the TADA Act, he appealed to the Apex Court to pardon his death penalty. After an extensive chain of appeals and petition executed in July 2015 per the punishment justified by the TADA Act.

TADA Act emerged during the emergency of religious terrorism. It made a decent attempt to define terrorism and to provide adequate punishments. However, the evil of terrorism could not get stopped by the tender footed provisions of the TADA Act. Hence, after two years, the successor of the TADA Act, the POTA Act, took over the position.

In which year TADA was repealed?

What is the punishment under the TADA Act?

Imprisonment for a term not less than five years but may extend to life imprisonment.

How long can an accused be detained under TADA Act?

One year without a formal trial

Can an accused file an appeal under the TADA Act?

Section 19 of the Act bars the accused to file an appeal except to the Apex Court.