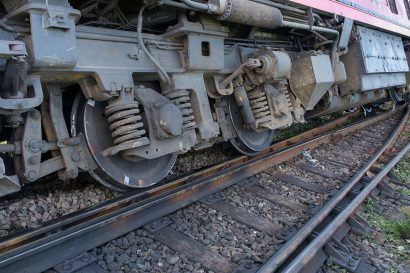 The Indian Railway is the world’s third-largest network, transporting 18 million people each day to their destinations. Every day, almost 16,000 trains pass across the railway tracks, and train collisions are a typical occurrence on Indian railways.

According to train accident records, derailments and railway crossings generate significant accidents. Until recently, crossings were open, and most incidents incorporated human error as the cause.

The Indian Railways do not have enough money to invest, and the annual accident rate is around 300, which is extremely high and requires immediate care. Though derailment and collisions have decreased significantly, human error and fire continue to be a hazard.

The Indian Railways has its disaster management plan to deal with rail catastrophes in all phases, including before, during, and after the disaster. However, railway safety results from all of these factors working together.

Consequences of train accidents include loss of human life or injury, damage to railway property, or disruptions in rail traffic that exceed established threshold levels and values. The growing population demanded more trains and increased the frequency of existing trains, resulting in an imbalanced increase in rail traffic over several years, putting immense pressure on rail tracks and exceeding the ‘safe’ limit.

What is Causing Frequent Train Accidents in India?

The accidents have focused attention on weaknesses in the Indian Railways, with reports indicating that train derailment was the major cause of train accidents in India during the last decade.

As a result, according to the 2016 report, the number of derailments in 2015 was higher than in 2014. It raises another concern of disparity in government records.

While a human mistake gets listed as the major cause of these incidents in the reports, there is disagreement over the number of instances the error resulted in catastrophe.

China has expressed its displeasure at India’s reported remarks by General Bipin Rawat. According to the report’s statistics:

Approaching Train Warning Systems and Train Actuated Warning Systems are two examples. All unattended level crossings on broad gauge railways would be eliminated by 2020, according to the Union Budget 2017-18.

When the Standing Committee on Railways looked into the safety and security of the railways, it found that more than half of the incidents occurred by human error. Such shortcomings are carelessness, bad maintenance work, shortcuts, and failure to follow established safety regulations and procedures. The committee has recommended regular refresher training for each category of railway staff.

Travelling by train is riskier than it is comfortable nowadays; we will try to learn about some deadly railway mishaps; train accidents have resulted in many deaths in India. These mishaps are not only unlucky but also distressing.

When there are many accidents, the Railway Department of India faces a significant challenge because rail transportation is one of India’s most important modes of transportation and should be safe.

Several news outlets said that the Mail was transporting Indian troops and soldiers from Assam to the border. At the same time, the Awadh Assam Express was headed to Guwahati and stationed near Guslar.

Due to signal failure, the Brahmaputra Mail got the green light to continue on the same track. As a result, the Awadh Assam Express was hit from the front around 1:30 a.m. By the power of the explosion, the engine of the Awadh Assam was flung high into the air, and passengers from both trains got hurled onto nearby homes and fields.

Some other major train accidents included Howrah-New Delhi Rajdhani Express on September 9, 2002, Gyaneshwari Express train derailment on May 28, 2010, and the list goes on and on.

In addition, 1600 railway employees lost their lives, and 8700 people were injured. According to the data, illegal trespassing kills roughly 15,000 people each year. Various factors, including fire, collisions, derailments, and unattended railway crossings, cause rail accidents.

According to train accident records, derailments and railway crossings generate significant accidents. Until recently, crossings were open, and most incidents were caused by human error.

The train’s speed is increasing thanks to modern technology, but it also necessitates robust safety measures to minimise train catastrophes and keep rail travel safe.

Indian Railways focuses on safety, and all reasonable measures are taken regularly to prevent accidents and improve passenger safety. To avoid accidents, the following steps/measures were taken: –

The liability of railways in the event of a train accident or death has always been a contentious issue. On May 9th, 2018, the Supreme Court of India resolved the case of Union of India vs Rina Devi. In this case, the Supreme Court ruled that death or injury while boarding or deboarding a train constitutes an”untoward incident. “

The Railways Act of 1989 provides compensation to the following individuals:

Certain people are not entitled to compensation under Section 124A of The Railways Act, and they are as follows:

Section 125 of the Railways Act of 1989 allows a victim or dependent of a deceased person to apply for compensation and pay the prescribed fee.

The railway administration has increased the compensation amount. The Railways Act, 1989, as amended by the Indian government, includes such enhancements. Compensation has been paid twice for people who have suffered severe physical injuries or have died.

The initial compensation amount of Rs. 4 lakh got increased to Rs. 8 lakh under the Railway Accident and Untoward Incidents (Compensation) Amendment Rules, 2016 in cases involving the death of a passenger or the loss of a limb. The Railways Claim Tribunal will award compensation to the victim’s dependents who died or suffered severe injuries.

According to the official notification, if a person becomes blind, loses sight in one eye, or becomes deaf, he or she will be awarded Rs 8 lakh in compensation. According to the official notification released by the railway administration, a person is also granted the same amount of Rs 8 lakh if that person suffers from severe facial disfigurement. The amount for injuries ranges from Rs.32,000/- to Rs.8,00,000/-, depending on the nature of the injury sustained.

Some of the rights given to the claimants are the Right to Legal Representation and Free Legal-Aid.

Indian railways must get compared to the Shinkansen, a Japanese railway system that has carried millions of people without a single fatality since 1964.

Apart from depending on revenue from the railway’s internal generation, the government will require a significant investment programme to accomplish all of this. This investment will not only save lives, but it will also pay off handsomely in terms of GDP. It’s past time to reclassify railways as a”basic infrastructure supplier ” rather than a”commercial organisation. “

Hence, the transportation on which such a large number of people depends must ensure their safety. It is a need of the hour to look out the ways to prevent train accidents in India.

Can I sue if I was injured in a train accident or at a railroad crossing?

Suppose you got injured in a train accident due to the carelessness of the train's operator, transport company, or another connected person. In that case, you might well get entitled to damages for your medical expenses, lost earnings, and misery and suffering.

How are runaway vehicles and out of control trains dealt with?

If trains pass dangerous signals, race through a station out of control, or move on block sections without authorisation to advance, the station master must notify the next station ahead of time.

What happens when the Alarm chain gets pulled in a coach?

The alarm chain in a passenger coach is designed to cause a break in the continuity of the brake pipes (whether vacuum or air brakes), resulting in a rapid loss of brake pressure (or vacuum) and the application of the train brakes.